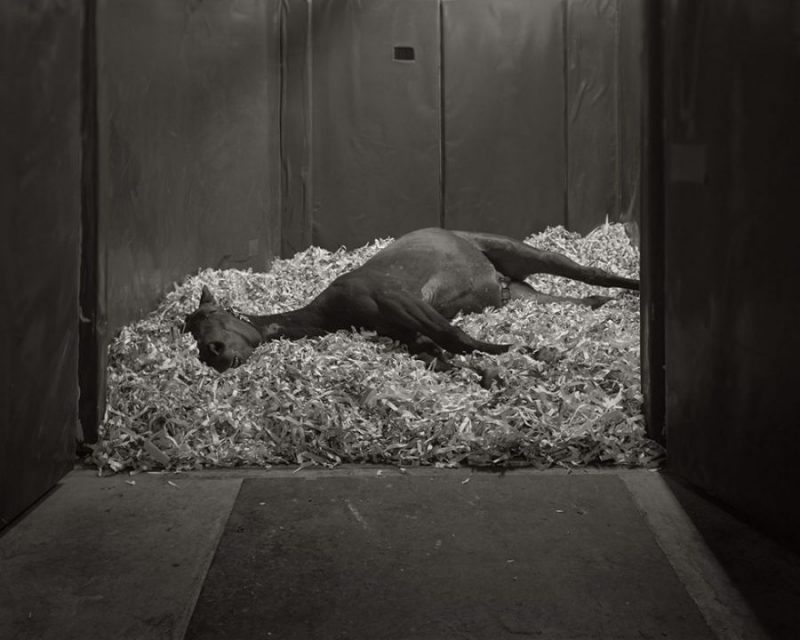 “Theatrum Equorum” by Andrea Modica is an extraordinary book: we understand from its title that we are entering an exceptional space; we encounter an utterly sui generis subject, depicted in a very peculiar manner, through the photographic mastery of one of the most skilled contemporary artists.

The latin words stand for “horses’ theatre”, where the majestic animals are its actors: they lie horizontally, after surgery, probably heavily sedated due to the anesthetics. The theatre here is a horse clinic in Bagnarola di Budrio, close to Bologna, Italy, where Andrea Modica spent a great deal of time throughout the years, exploring the volumes and structure of the place while empathizing with its transcendence and metaphorical meanings.

Photography and theatre differ quite a lot: the former is a very detailed static fragment of a narration, which might develop through time and movement, whereas the latter exists thanks to its performative nature, altogether against stillness.
The artist might refer to an action taking place during surgery: vets release animals from their pain, with professional competence and affection, using specific tools whose names we learn at the end of the book.

“Theatrum Equorum” is extraordinary as it stands out among the many great recently published photobooks thanks to its environmental uniqueness: in fact the majority of pictures were taken inside the clinic, predominantly indoors, while a significant number of contemporary photography-based books depicts outdoor landscapes and question our agency pondering over the effects of our often disrespectful behaviours towards nature. The crowd of photobook lovers has become familiar with the contemporary representation of dead animals: it is very common to flip through a book and gasp at the sight of some lifeless bush creature abandoned on a rather somber soil.

Modica questions our perception as observers, inevitably equipped with an apparat of biases and expectations, and demands an active stance from us; despite what might appear at first glance, the animals here, inside the clinic, are (still) alive. Their depiction suggests a perspective that blurs the boundaries between life and death.

The humans Modica focuses on, namely the vets, show a considerate attitude towards the animals. They cure and provide them with the medical cures necessary to their survival. This is a book about life whose inner strength comes out from the very fallibility of beings; horses’ size and the way they have been usually depicted throughout art history are at the centre of our expectations: we tend to think of them as powerful and forceful creatures, whereas Modica leads us towards a new understanding: by seeing them lying there we are inevitably hunted by a feeling of discomfort.

“Theatrum Equorum” is not an easy book: as a fairy tale it can deeply affect us and dramatically show the irrational yet real value of opacity, Modica’s book confronts us with our emotions and fears and turns out as a possibility to face what we are probably not comfortable with, such as the idea of failing tout court and, more precisely, failing sick.

Modica’s photographs can be very clinical: she sometimes isolates the bones extracted from the horses’ bodies and shows them on blood-stained gauzes; the artist’s black and white preserves

us from a too painstaking documentation of reality while keeping an artistic distance between the medical environment and the observers.

Space, here, is everything: both areas of the clinic where Modica sets up her scenes are captured as a theatrical stage and the volumes of her camera are fundamental for understanding the book.
She places her 8 x 10 camera – a very peculiar device from where to observe the world – in front of essential props. Their seriality is radical: sleeping horses and surgery instruments, both clean and dirty. The artist stays constantly focused on them and the observers adopt the same stance while looking at the book, which appears as a Deleuzian repetition of the non-identical. Modica dwells inside: the way she stages her pictures is theatrical and essential at the same time, using velvety textiles to cover the surfaces where she places the instruments, photographing horses via a frontal seriality.

Only a few pictures contain windows and depict the liminal elements from where the light comes in, thus connecting the inside with the outside; the atmosphere is different from the one in the stalls, less dark, less uncanny, more straightforwardly descriptive. The horizon is wider and our understanding of the space changes with it.

Modica includes within the book pictures of phantoms – objects simulating the female horses’ bodies in the veterinarian jargon -; they attract the male animals whose seed will eventually impregnate real female horses. At stake here is once again what photography might stand for, what is usually misleading.

The “how” described in “Theatrum Equorum” is extraordinary; the artist aims at depicting one of the most popular art subjects such as the horse, not while it stands high in its physical greatness but while lying down: the animals are all photographed horizontal, showing their fallibility, finitude, and ultimate fatigue. Their posture, far from being a petty detail, is a key element within the book and the project as a whole: they lie on paper and hay beds mostly with eyes closed, seemingly dead yet still alive. Modica’s horses are still-lives, living yet paralyzed creatures, Freudianly dwelling in their static yet vital state.

Her objects, all functional to a precise surgical action and attentively displaced by the artist, hint at the great formalism: Modica analyses their shapes, volumes, proportions with the aesthetical taste of Weston and Mapplerthorpe. She invites us to think of them as beautiful forms rather than surgical tools, until we are reminded of their function by the blood stains on some of them. The way the American photographer treats her subjects is exceptional: the time, care and patience she took to finalize her project discuss the sacrality of what is placed in front of the camera. Medical devices are live mediums, tools necessary to the success of the operations; horses are majestic and heroic animals whose suffering the photographer witnesses and empathizes with. Documenting the troubled and promising path through their well-being is for the artist a way to celebrate life, despite its fallibility, sickness and pain.